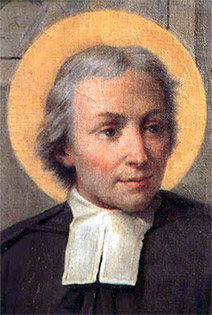 This work painted by Pierre Leger, most likely the second such work. It is currently preserved in the Archives of the Generalate. Dated 1734, it has been adopted as the official portrait of the Founder. It reminds us of Blain's description:

"His face was always happy, tranquil, and imperturbable...
The image of kindness that characterized him
also produced a joy among those around him".

John Baptist de La Salle was a man of his time. Born in France in 1651 to a wealthy family (his father was high in the legal profession), De La Salle would become one of the most innovative educators and thinkers of modern times. He lived in an age of great thinkers and of great people. He grew up whilst St. Vincent De Paul was establishing his great work with the poor and when in England; the philosopher John Locke was penning his 'Thoughts on Education'.

De La Salle was himself a well educated man, his highest degree being Doctor of Theology. Amidst all this, in 1684, De La Salle founded the first, non-clerical, male teaching order in the Church. Others had tried but had failed to establish the connection between a life of prayer, the apostolate and community life. De La Salle saw the connection of all three.

That is not to say that life was easy. De La Salle (a priest) encountered many obstacles within the Church and from civil authorities that had something to lose with the establishment of a 'free' Christian Schools. Indeed, in 1691, De La Salle, with two other Brothers, made a vow of association: to remain together, to achieve God's work that had been entrusted to them, despite adverse circumstances.

John Baptist De La Salle was very much an innovator when it came to education. In his time, he established schools for those unable to obtain an education. De La Salle conceived the idea of having the students in one classroom with the teacher. He established Teacher Training Colleges, Technical Schools, and a Maritime College, wrote on Special Education and conceived the notion that students would learn best in their mother tongue, rather than in Latin.

Today, we take these things for granted. Given the lasting effect that De La Salle has had on education, it should not be a surprise to learn that in 1950, he was proclaimed by the Pope to be the Principal Patron Saint of Teachers and Student Teachers. Over three hundred years later, some seven thousand De La Salle Brothers and thousands of Lasallian Partners and Teachers continue the work of St. John Baptist de La Salle, people who "devote themselves whole heartedly, to the human and Christian education of youth."