Concord, Calif. (September 3, 2020) - On Tuesday, September 1, the De La Salle High School Board of Trustees announced that school President, Mark DeMarco ‘78, will be retiring at the end of the 2020-21 school year. Mark DeMarco has served as the De La Salle President since 2007, when he was named the school’s first Alumni President.

“I want to thank the parents, students, the countless volunteers, and benefactors who have contributed to the success of the school and the mission of Saint John Baptist de La Salle and will continue to do so in the future”, said DeMarco. “I also would like to thank the Faculty and Staff for their commitment to the Mission – the school is successful because we all work together and have a great partnership with parents as the primary educators of their sons.”

A graduate and former teacher, DeMarco was appointed by the Board of Trustees as president of De La Salle High School on July 1, 2007. With broad experience in administration, organizational and strategic planning, he has more than 30 years in educational teaching and management stretching from elementary through high school. Prior to returning to De La Salle in 2007, DeMarco served as assistant, then Superintendent of Schools for the Diocese of Oakland. He has served on a number of boards throughout his career including the California Catholic State Superintendents (chair), the Western Catholic Education Association, the University of San Francisco Institute for Catholic Educational Leadership and the California Private School Advisory Committee where he was appointed by the State Superintendent for Public Instruction.

In the announcement released to the parents earlier this week, De La Salle Board of Trustees Chair, Frank Wagner ‘73, said, “We appreciate all of Mark’s excellent accomplishments, and cherish how he’s placed our students, the school, our community, and our Lasallian Catholic mission above himself. He leaves the school in a strong financial position, with an excellent academic reputation, significant enhancements to the school’s facilities, and a legacy of enabling students to become young men of faith, integrity, and scholarship.”

Brother Donald Johanson, FSC, Visitor of the District of San Francisco New Orleans, expressed his gratitude for Mark’s efforts at the school, “We are grateful for Mark’s leadership and lifelong dedication to De La Salle High School. From his days as a student and throughout the time since he first returned to campus, Mark’s commitment to the De La Salle community has never wavered. I wish him the very best in his retirement from a long career devoted to Catholic education.” 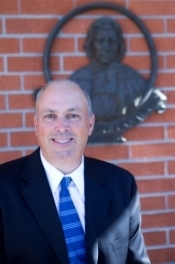 Under DeMarco’s leadership at De La Salle, the school completed a highly successful comprehensive campaign that led to the building of a new Science, Technology, Robotics, Engineering, Arts, and Mathematics (STREAM) Innovation Center, the Ladouceur Athletic Performance Center, and a new Learning Center. During the campaign, the school secured the largest individual gift to a high school in the country (at the time of gift) $25 million from the late Kenneth H. Hofmann, which included a $15 million endowment for financial aid.

During his tenure, the school further enhanced and created the Bishop John S. Cummins Scholarship Program in 2007 to ensure that students from diverse social, cultural, and economic backgrounds have the opportunity to experience educational excellence. The Bishop Cummins Scholarship Program provides significant tuition assistance, additional financial support for many incidentals, and a challenging and supportive learning environment. Bishop Cummins Scholars are offered the opportunity to succeed and are taught the skills and habits that make academic success possible.

Considered an innovator with leadership, he transformed the school’s leadership model to one of a collegiate framework when he established the President’s Cabinet in 2016.

The De La Salle Board of Trustees has retained a highly recognized and capable search firm, Educational Directions, to lead the nation-wide search for DeMarco’s successor.