On Thursday, November 21, at the school’s Thanksgiving Prayer Service, De La Salle President Mark DeMarco presented Mrs. Dee Turrin with the school’s Saint Benilde Award, which recognizes an administrative staff member who plays a significant role in the successful operations of the school.

De La Salle staff members are not in the classroom, but each play a significant role in the success of the school. Many work behind the scenes and play vital roles, and are known for their dedication, loyalty, and service to the school.

Saint Benilde earned the reputation as a wise administrator, exceptional teacher, faith filled catechist, helpful supervisor, and strong disciplinarian. He was proclaimed a Saint on October 29, 1967, the first Christian Brother to be so honored. De La Salle’s Saint Benilde award is presented to a staff member every two years.

This year, De La Salle had a number of people nominated for the Saint Benilde Award by their colleagues, and all nominees are worthy recipients. However, Mrs. Turrin stood out among the nominees.

In the submitted nomination forms, the words used to describe Mrs. Turrin were as follows: 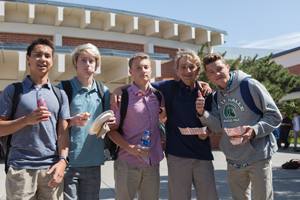