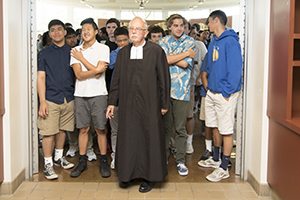 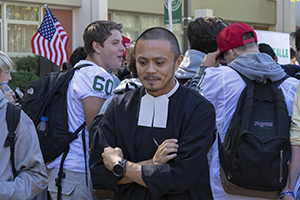 De La Salle High School was founded in 1965 by the Brothers of the Christian Schools (also known as "the De La Salle Christian Brothers," or simply "the Christian Brothers"). While the school is currently without Brothers on campus, the school is still sponsored by them. The Board of Trustees ensures that the Catholic and Lasallian principles on which the school was founded, are still very much alive. The school is associated with the other schools and educational works of the District of San Francisco New Orleans.
The Brothers of the Christian Schools is a religious order of men devoted to education. They live in community and profess vows to bind them closer to God and to free themselves to fulfill their mission. There are no ordained priests nor deacons in the Brothers.
The faculty and staff of the school operate according to the educational and spiritual principles of the Brothers and their founder, Saint John Baptist de La Salle. The Five Core Principles guide the work of any Lasallian school.
Powered by Finalsite