Seniors in Mrs. Talmadge’s History of the Sixties class participate in the Veterans History Project as part of their service learning for the semester. The Veterans History Project is an extension of the Library of Congress with the goal of collecting, preserving, and making accessible the personal accounts of American war veterans. Students have interviewed veterans from the Korean War, the Vietnam War, the Persian Gulf War, and the current war in Afghanistan. At the end of each school year, students from both semesters host a celebratory breakfast for the veterans that have participated in the project.

Jerome Hudson was a commissioned officer in the US Army from 1963 - 1967.  He served in South Korea as part of the Korean Defense port-Korean War. He was interviewed by students on October 23, 2019.

“One of the most striking anecdotes was about him seeing photos of modern-day Korea and being amazed at how much it developed over time. I learned from the interview that even with language barriers, you can still form genuine connections with others. My personal take-away is that while war brings tragedy, it can sometimes bring positive things to those who serve and it forces them to mature.” - Gabrielle Ong

“I was happy to interview a veteran who had experiences outside of combat. I learned that the GI Bill helped with educating soldiers. My take-away from this interview is that the Army and military help the veterans in many ways.” - Tonantzin Melvin

“One cool fact that I learned during the interview was how even during his time in Korea after the Korean War, Mr. Hudson was there still making friends and experiencing what the culture had to offer. His military service was more than just a job to him.” - Sean McDevitt

Malcolm Mailey enlisted in the US Army in 1964 and served until 1967.  He spent his military service in Vietnam, stationed primarily in Saigon. He was interviewed by students on October 22, 2019.

“I feel thankful for the sacrifices that Mr. Mailey has made throughout his life. Something that stood out to me during the interview was that I realized just how much I will never understand the true feelings this man must have gone through. I am thankful because actions he and his generation made are what make it possible for my age group to live peacefully.” - Ricky Cademartori

“The Vietnam War always seems less real when it’s in a video or textbook, but when someone speaks about their service right in front of you, it’s hard to ignore how real the war was. My biggest takeaway from the interview is how much someone’s life changes once they become involved in a war.” - Rachel Gotvald

James Peterson was drafted in the US Army and served from 1953 until 1955.  He was stationed in Germany and was part of the US occupation there after World War II.  He was interviewed by students on November 4, 2019.

“The things that stood out to me in the interview was learning about Germany and what Mr. Peterson went through. Even though he didn't shoot anyone or get shot at, I thought it was interesting to learn about what was going on in Germany after World War II.” - Gabe Espinal

“This interview gave me a great idea of what life would have been like serving back then after World War II. Mr. Peterson was very open to answer all our questions and gave great responses.” - Ben Morrisroe

Roger Petersen enlisted in the US Army in 1965 and served as a military police officer until 1968.  He was stationed at Cam Ranh Bay in Vietnam. He was interviewed by students on October 24, 2019.

“My take-away from the interview is that we should all respect others - we don’t know what they may have done for us. I would have never known that Mr. Petersen served in the war as part of the military police if I didn’t talk to him. We should all get to know each other more; put down our phones and talk to people; disconnect once in awhile — make connections with others.” - Ryan Bean

“I learned that not everyone was drafted into the war; most people actually wanted to fight due patriotism or some just wanted a way to escape their living conditions.  My take-away from this experience is that these veterans deserve respect and their service should be honored. People are too caught up in technology to take the time out of their day to thank veterans for their courage.” - Tony Renghini

“In today’s news, we mostly see the bad side of our military. News channels sometimes villainize our military because of one certain action, ignoring the rest of the dedication and hard work that they do. When watching the news or reading an article, we tend to forget that people in our military are humans and we are often quick to criticize them, but we shouldn’t do that. We need to be aware of the sacrifices men and women make everyday for us to be here living our daily lives and realize that they are doing their best and truly love this country.” - Jonas Gutierrez

Mark Steinberg enlisted in the US Navy in 1968 and served until 1971.  He was stationed in Saigon during the Vietnam War. He was interviewed by students on November 7, 2019.

“My take-away from the interview process is that we must listen and understand what the soldiers say about wars because they are really the only ones that are able to fully grasp what truly happened.” - Julius Portis

“Something that stood out to me was how challenging the veterans’ lives were after the war and how they weren't always treated with the respect they deserved.” - Paolo Choa

“As someone that wants to travel the world and live everywhere, learning about Saigon was very interesting.  Mr. Steinberg talked a lot about the culture that was present in South Vietnam.” - Conor O’Donnell

David Wullenweber enlisted in the Marines in 1964 and served until 1968. He was stationed at the Concord Naval Weapons Station and later in Vietnam, most notably serving during the Tet Offensive. He was interviewed by students on October 17, 2019.

“My biggest takeaway from the interview was the lesson Mr. Wullenweber learned.  Upon returning home after serving in Vietnam, he realized that if you're not happy in life and with what you're doing, then there is no point in doing it. He told us to live each day to its fullest and to enjoy what you're doing. Life’s too short not to enjoy it.”  - Logan Lemoine

“I learned a lot about the lesser known details of the war through the interview with the veteran. I guess I had always thought the villagers in Vietnam didn't like the Americans, and after meeting with my veteran, I learned that most of the time the villagers were often friendly towards the troops. I learned about the relationship between the troops and the Vietnamese kids and how the kids would come up to the troops and ask for American candy. Those are little details that totally changed my perception of the relationship between the troops and the kids and villagers.” - Aiden Ryan

“The interview overall was a great experience and there were a couple times I was taken aback by how detailed Mr. Wullenweber was.  It was very humbling to hear the personal experiences of a veteran who has not shared his story with many people.” - Matthew Guichard 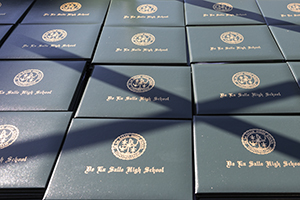